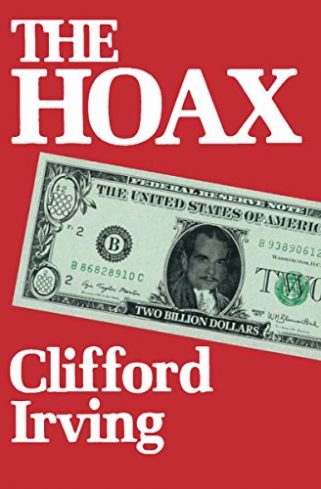 This is what The Hoax is all about. In 1970, Clifford Irving concocted a wild idea – to publish an authorized biography of the eccentric billionaire, Howard Hughes – involving his friend and fellow author Richard Suskind in the ruse. The only problem is that Hughes had been a recluse since 1958. Very few people, even in his own inner circle, had spoken to him via any means. This is what made the biography so sensational – Irving claimed that he was having secret, in-person interviews with Hughes, who wanted to tell his life story.

What follows is a series of lies, coincidences, half truths, and some wildly unbelievable luck. Peppered throughout the story is a recounting of Irving’s personal relationships with his wife, Edith, and the woman with whom he had long-term affair with, Nina van Pallandt.

From a crime caper standpoint, this book couldn’t have been more exciting. As I was reading, I couldn’t help but be drawn in, at times rooting for the antihero that is the character Clifford Irving. I marveled at what Irving and Suskind – at one point referred to as Irvkind – were able to get away with at the time. Had the unbelievable stories they imagined, and passed off as truth, been told today they wouldn’t pass a single second of scrutiny against the internet. But, such was life before the information super highway.

The problems with the book begin within the first few chapters, though. Clifford is a raging narcissist, an adulterer, a philanderer, and an unscrupulous liar. If this had remained within the context of the caper, I might have overlooked it for the sake of the story. But it’s not. These character flaws are most prominently displayed during his anecdotes of flagrant lying to his wife, Edith, placing her and his family at greater risk than he ever knew. The price she paid for loving him was prison sentences in both the United States and in Switzerland for the role she played in the hoax – which involved cashing checks from a Swiss bank account under a false name to fool McGraw-Hill into believing they were paying Howard Hughes. While Edith wasn’t exactly innocent in the plot, her actions, according to Irving, were a desperate attempt to keep her husband from his wandering lusts. After her release from prison, they divorced.

In the end, I didn’t feel like this book was an attempt to set any records straight. And though he said the words, I never believed that Clifford Irving regretted anything. He was simply sorry he got caught. His constant refrain that he didn’t believe he was committing a crime – that it was a hoax (and that somehow made it different, innocent) – might have been believable if he hadn’t repeated it so many times. Instead, I came away feeling a little used, a little cheated, and a little dirty.

After getting to know Clifford Irving, I can say I greatly dislike him. This was no confession or apology. This was Clifford Irving patting himself on the back, and an opportunity to cash in on a crime he almost pulled off.

If you’re into true life crime capers, and can stand 380 pages of a man who does nothing but betray his wife and a host of friends and supporters with absolutely no conscience whatsoever, you might enjoy The Hoax. The crime part of the story was actually pretty entertaining.