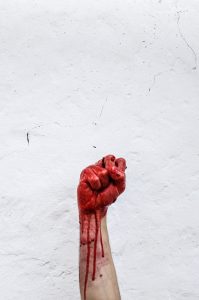 Pitched as a “cyberpunk noir” story, Some Assembly Required by Victor H. Rodriguez reads like a parable on the dangers of celebrity and power. Betrayal and murder are the order of the day, and Victor does not pull any punches when relating the details. From mildly uncomfortable to positively gruesome, Some Assembly Required is a visceral treat for those who enjoy that kind of story.

For me, this pushed the limits of my boundaries. I’m not a huge fan of violence and gore in stories (I’m a sensitive murder mystery writer, what can I say?). But I feel that Victor has used it appropriately to tell his story. There’s a shock value, which I appreciated. And while it was explicit and, for lack of a better word, gross, it was not gratuitous. The violence and destruction made sense within the context of the story. Reader beware, Victor does a fantastic job of making the scenes vivid and impactful.

Some Assembly Required (a very clever title) is told from the point of the view of a waiter, who bore witness to the events that transpired. Ultimately, it is told from the first person, however that’s not exactly how the story starts. The first several paragraphs come across as third person, with a POV shift in the form of breaking the fourth wall. I wasn’t a huge fan of that. I would rather have had the first person POV from start to finish, with no direct contact between the narrator and me.

I think the best part of this story is the satire of it all. Some Assembly Required is incredibly layered, and can be read as the cyberpunk noir it’s billed as, as a statement on the nature of politics and business as bedfellows, or, as I chose to read, a dark comedy on the false promises of power and wealth. While nothing in the story is funny, it’s the irony of the razor thin veil between real life and fiction that made me chuckle and say, “I see what you did there.”