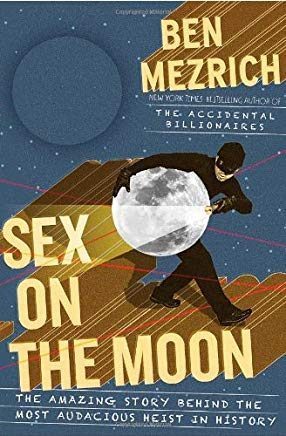 I bought this book simply for the title. I figured anything with a name as catchy as that would be an interesting read, no matter what it was. And I was not disappointed.

As it turns out, Sex on the Moon: The Amazing Story Behind the Most Audacious Heist in History, by Ben Mezrich, is a wild romp, made even more fantastical because it is a true story. I had a vague familiarity of what the book was about, more so in urban legend than anything else, and found myself quickly absorbed in the actual events.

You’ve probably heard the urban legend which I’ve mentioned: someone once stole moon rocks for the purpose of having sex with his girlfriend on them. The truth is just as outlandish.

Thad Roberts earns a position as a NASA co-op and has a promising career in the making. But, after being shown a vault deep withing the Johnson Space Center that held moon rock samples that were essentially considered trash (meaning they had been used in experiments and for demonstrations, rendering them unusable in further testing), Thad concocts an idea to sell them for what he perceived to be their true value, $5 million. The truth is they were practically priceless. Being an amateur, Thad settled for the ridiculously low price of $100,000.

And he might had gotten away with it, if it wasn’t for a meddling amateur geologist in Antwerp, Germany. Axel Emmermann, a hobbyist and member of the local geological society, receives what others perceive to be a spam email claiming to have the moon rocks. He alerts the American authorities and a sting is set up. In the end, everyone involved gets some form of comeuppance, and the rocks are returned to NASA.

The story is much more intricate than what I’ve summed up, and it’s in these intricacies and details that the true story lives. Mr. Mezrich weaves an enthralling tale, supported by numerous interviews with the people who were most involved. But the story is not portrayed as a hero’s tale, or really glorified in any way. While you almost root for Thad, given his upbringing and the challenges he faced along the way, you also pity him, for you know well in advance that his naivete and hubris will cost him everything. It’s the emotional journey you are in for with this book. And for the moments of sheer gall, luck, and brassiness of someone who already has earned everything anyone could ask for.

I have a hard time finding any fault with this book. It’s extremely well researched and edited, the story is enthralling and captivating, and it’s a complete story arc, with real consequences and a satisfying conclusion. And it’s made all the better by the fact that it’s all true. There is no hyperbole in calling this the most audacious heist in history.

I recommend this book if you want to read something that makes your jaw drop. Simple as that.