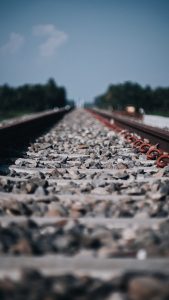 Justice never felt so good in this horror short by Jacob Klop. One Hell of a Ride is indeed just that.

Sylvia is a hospital worker, most likely a nurse but it’s never explicitly said. Her profession may seem noble, but her intentions for her patients are anything but. After being late to her train, she catches a new one, and as one might expect, it’s certainly not one she wants to be on.

Mr. Klop does an excellent job with his descriptions. In the first two paragraphs we meet the ever-late Sylvia, who is subject of a train full of passenger’s schadenfreude when she misses the train. Though she has no one to blame but herself, she directs her anger at each of the passengers, revealing at best a misdirection of emotions, but which turns out to be a certain level of narcissism. The best part about it is that we’ve all been there, and it effectively makes us want to sympathize with her, despite the fact that her misfortune is a product of her own behavior. She is human.

And that, in the end, is the best thing we can say about Sylvia.

This story went from creepy to horror in the best sort of way. At first I was skeptical, and Mr. Klop does an amazing job at keeping you guessing. Is Sylvia good? Is she bad? Which part of her memory is the part that she’s savoring? These questions contribute to the building sense of doom that is so expertly developed throughout. My heart was actually pounding at some points!

One Hell of a Ride is not perfect, though. The narration wanders into a grey area between third and first person on a number of occasions, and suffers at points at the hands of punctuation, or the lack thereof. There are a few times where it’s difficult to know if we are to be watching as omniscient observers or if we are meant to be inside Sylvia’s head. All of this can be fixed with punctuation and formatting.

But none of that distracts from the language. I’ll be the first to admit that, at least twice, I did a double take because I was shocked at the turn the story was taking. And some of the writing is truly fantastic. My favorite line was, “Twisted, gnarled trees in the distance pointed leafless fingers up to the slate grey sky.” This sentence rolls off the tongue (even if you’re reading in your head) and was such an eloquently delivered description that I could see it as if I were looking at a painting of it. These particularly well-crafted sentences are peppered in, and are a true gift to the reader.

One Hell of a Ride is a twisted take on an already somewhat gruesome fable, which I won’t name because I don’t want to spoil it. Or, perhaps it’s more accurate to say that this story is inspired by that tale. Either way, it delivers on horror, intrigue, justice, and most importantly, entertainment. Check out One Hell of a Ride by Jacob Klop, right here. (Note, if the link brings you to Mr. Klop’s home page, just click on the Short Story link and it will bring you right where you need to be.)