I think I’m going to change the way I do reviews a little bit. I’m going to start putting links to the stories I’m reviewing at the beginning of my posts so you all can read them before you read my review if you so choose.

Here is the link to Grackle, by Alexis Lantgen, featured in her short story collection Saints and Curses. Be aware that the following review may contain spoilers. 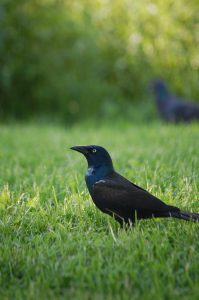 A woman is turned into a blackbird when she confronts her abusive boyfriend.

Grackle gripped me from the very beginning. Jane is confronting her abusive boyfriend, and as expected, the worst happens. They live in a world where magic is very real, and he attacks her, despite the public place they are in. Somewhere in the melee that ensues, Jane is hit by a curse and is turned into a grackle, which, as I found out when I looked up the definition, is an American songbird in the blackbird family.

First, witnessing a person confront their abuser is something that hits very close to home for me. I think Alexis described this as accurately as possible while also being quite delicate with the details. As the story unfolds we get a larger view of the abuse that Jane has been surviving until she works up the courage to finally leave. The consequences of that departure are very real for her, and her life is completely changed as she must now learn to live confidently on her own, as well as literally survive as a bird.

The world that Alexis creates in Grackle is incomparable. I’m unsure if Jane is magical in this story or not, but her boyfriend clearly is, as he takes out a wand and casts a spell to try to harm her. There are magical beings, including “security gargoyles”, which I thought was delightfully appropriate in the setting. One can also purchase magical items of varying quality – drug store charms are referred to, which implies that there are designer and professional items of magic that can also be purchased for more money. I think the world building in this short story was absolute perfection, with the world being close enough to ours to be relatable, but with clear differences and expansions due to the presence of magic. This was very well done!

As I said, the element where Jane is escaping an abusive relationship hits close to home, as does the scathing indictment of health care that Alexis includes. When Jane is first transformed into a bird, she reflects that it would practically bankrupt her to seek medical intervention to return her to her human form, and that even the lowest form of acquiring money – selling your soul – doesn’t pay as well as it used to. I think this passage is both brilliant satire and insightful condemnation.

As we see Jane grow and change through her experience of learning how to survive as a bird, the message becomes more and more clear. In a different passage, Jane meets Ki, a raven, who offers wisdom and comfort. He shows Jane that she has it within her to change herself back into her human form, and that the curse that binds her is only as strong as the energy she feeds it. In slow steps, we see Jane accept who she is and take steps to change and grow with both direct and symbolic examples. A final act of heroism finally brings Jane to the confidence she needs to return to her human form and follow her dreams, and the story ends on a positive note. The final message is nothing altogether new, but it is incredibly important: everything you need is inside you somewhere, you just have to find it and accept it.

Alexis did such a fantastic job with this story. I didn’t notice any grammatical or punctuation errors, and the story moves at a brisk and captivating pace. Her characters are well developed, particularly for a short story, and the complete arc leaves me completely satisfied with the length of the story (I usually feel like I’m missing something and want stories to be longer). Grackle is the first in Alexis’ short story collection Saints and Curses, and sets the bar pretty high. I can’t wait to check out the rest of the stories! If you haven’t already, check out Grackle, by Alexis Lantgen, right here.