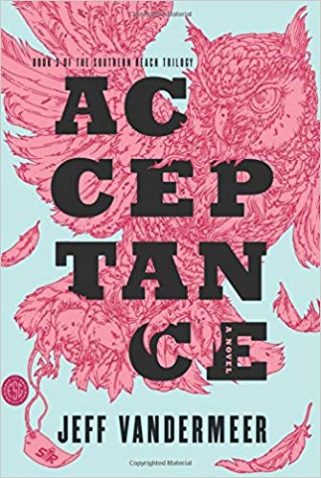 In the final installment of the Southern Reach trilogy by Jeff VanderMeer, Acceptance ends the journey into Area X that we have been on with the biologist, Control, Grace and the Director. Everyone has found their way into Area X and are coming to terms with all that that entails.

Which I haven’t figured out.

I am not a science fiction reader, and I’m trying to broaden my horizons. I think this trilogy was a little too high concept for me, especially being new to the genre. What I found in Acceptance is that Jeff VanderMeer created a devastatingly beautiful world in Area X, something so vivid and alive that it’s a character unto its own (a point I’ve made before). But in the end, I felt like not much was done with it. We know that it’s there, but we don’t know why. We don’t know its motivations or its purpose. It’s just there, doing what it does. To me, since the environment was as much a character as anyone else in the story, the character felt undeveloped, underutilized, and incomplete.

The book, and the series as a whole, includes a number of themes, including (but not limited to): religion, loss, death, the end of innocence, environmental concerns, and the relationship between humans and the environment around us. But, while making statements about them, the story makes no conclusions about them. It feels like being told to be aware of something, but getting no further context. Most of this final installment felt like subtext, like someone knew something and was trying to talk to me about it, but without telling me what they were talking about.

In the actual plot of the story, I felt like too much was left unanswered. Without revealing any spoilers, there is a lighthouse lens that features prominently in the story, but we are never told why it’s important, or what it’s backstory is. Nor are we told how, if at all, it is relevant to what is happening in Area X. As far a plots go, I felt left in the dark, the butt of some ethereal joke.

Again, I think this book was just a little too over my head. The writing is beautiful, and the world building can’t be beat, but for me that really couldn’t make up for feeling unsatisfied at what has ended up feeling like a very long journey. I’m going to have to accept that, and maybe that was the whole point all along.