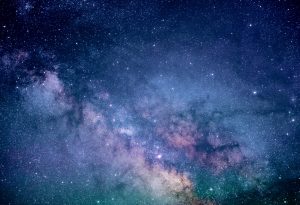 A space mission changes the life of the captain, altering the perspective of our own existence and creation.

A Canvas Dark and Deep by Robert Mitchell Evans is pretty high science fiction mixed with the perfect combination of suspense, action and adventure, and philosophy. Captain Newman finds himself in a position of authority that none on his ship respects, on what is basically a mission of menial research. A discovery of a new means of space travel propels the captain and his crew not only into uncharted space, but also into the turmoil that presents when there are too many cooks in a very small kitchen. Everyone has their priorities and everyone believes their priorities are the main priority.

But Captain Newman defers to someone who isn’t in a position of authority, Dr. Amanda Hollingston. With no proverbial dog in the fight, she and Captain Newman proceed with research that others argue against for a variety of reasons. What he learns about our universe, what we learn, is so beautiful, and so filled with hope and promise that I am still reeling with its revelation. It’s so simple and obvious, and yet it takes a view of the entire universe to communicate it.

I loved this story. I absolutely loved it! A Canvas Dark and Deep was so entertaining, and so wonderfully executed that I can’t say much more than that about it (though I’m going to anyways). This story comes across as a blending of Stanislaw Lem’s Solaris, Robert Zemeckis’ film Contact (based on Carl Sagan’s novel of the same name, which I have shamefully not read), and Dennis Villeneuve’s film Arrival (which is based on Ted Chiang’s short story Stories Of Your Life, which, again, I’m ashamed to say I haven’t read). At first I was a little confused with the scientific terminology, real and fiction, but once I acclimated I was completely enveloped and invested in the story. This is easily a new favorite for me!

Check out A Canvas Dark and Deep by Robert Mitchell Evans. Even if you’re not a fan of science fiction, I fully believe you’ll find something you love about this story!